The findings of a study by PMW Technology funded by the Department for Transport’s T-TRIG programme show that carbon capture using the cryogenic A3C process would achieve marine decarbonisation at 50% of a comparable cost for zero carbon fuels.

The six month project analysed case studies of the application of the A3C process to two modern ship designs, a large car and truck carrier and a Ro-Ro ferry. PMW Technology worked with the University of Chester, together with naval architects Houlder Limited and Tees Valley Combined Authority to evaluate key aspects of these process applications.

The study showed that physical implementation of carbon capture and storage was feasible without radical change to the vessels. The effects on cargo-carrying capacity were found to be minimal, while vessel stability under adverse sea conditions was maintained. Operating costs were fractionally increased due to process auxiliary power demand, while capital costs were small compared with vessel costs. Although the marine case studies captured a modest 25 50,000 t/y of carbon dioxide, the life costs of carbon abatement of the A3C process were consistent with those for conventional industrial applications at ten times the scale.

A highly significant finding was that the infrastructure cost for transfer of the captured carbon dioxide to sequestration was a small fraction of the total cost. This unexpected result arises from the low cost of transport of carbon dioxide by sea combined with savings from synergies with the industrial carbon capture clusters. Sharing the infrastructure for industrial carbon sequestration minimises abatement costs and reduces investment costs and risks for all parties.

The context for the study is the commitment made by the IMO for large reductions in shipping emissions by 2050. The primary option is switching to zero carbon fuels such as ammonia. Prior work for the DfT showed that the necessary radical changes to fuel supply and to vessel design and operation had a cost of carbon abatement of £190/te.

The key conclusion of the study was that carbon capture by the A3C process offers a 50% lower cost of marine carbon abatement than a transition to ammonia.

A one page summary of the study can be read here.

The full study report can be read here.

Our academic partner, Dr Carolina Font Palma at the University of Chester, has been awarded funding to work with PMW Technology to design and build a pilot cryogenic carbon capture process unit at the University’s Thornton Science Park.

The funding will enable the key low temperature separation process to be demonstrated and evaluated in continuous operation. The design is well advanced, with construction planned to be competed by Easter 2021, followed by commissioning and testing of the pilot.

The pilot unit has a working bed dimension of 100mm square, but despite its small size will be able to separate 75 to 300kg carbon dioxide per day, depending upon inlet gas composition.

Subsequent stages of development are planned to include the addition of the inlet gas treatment process to enable real exhaust gas streams, such as from diesel engines, to be handled by the process. This addition is relatively conventional but needs to demonstrate the successful cooling and removal of moisture and contaminants to extremely low levels.

PMW Technology is delighted to have been awarded funding under the Department for Transport’s T-TRIG programme. The funding is for a six month project to evaluate the potential for our A3C process to be applied to shipping. We will be working with our long-established academic partner, the University of Chester, together with naval architects Houlder Limited and Tees Valley Combined Authority. These partners will bring ship design and operational know-how for A3C integration and an understanding of the economics of industrial carbon capture clusters to support assessment of the impacts of extra carbon dioxide unloaded from shipping.

The commitments made by the IMO for radical reductions in shipping emissions by 2050 will require major changes to fuels and vessel design. The current favoured option is for the use of zero carbon ammonia as fuel. However the global investment required for fuel production and changes to ship design has been estimated to exceed $1 trillion. Application of A3C to capture engine emissions with delivery of the captured carbon dioxide to ports would avoid the huge cost of new fuel production and delivery systems. It would also allow retention of existing vessel and high performance engine designs, potentially offering a much lower cost of marine decarbonisation.

Paul Willson was presented with the award by Julian Critchlow, Director General, Energy Transformation & Clean Growth, BEIS. The Rushlight show is a key event showcasing low carbon energy innovation. It is supported by BEIS and was addressed by the Minister, Claire Perry, on 30th January who announced further low carbon funding initiatives. 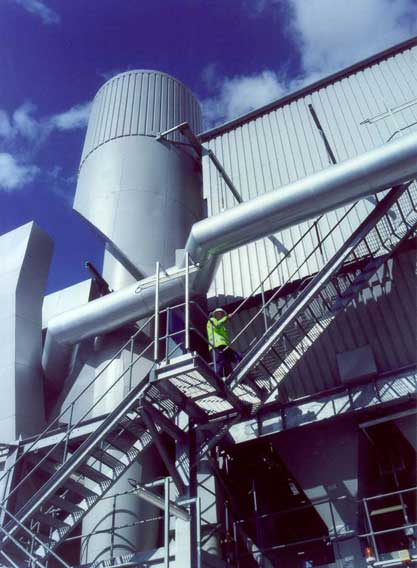